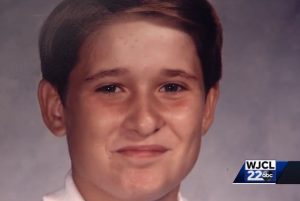 “I mourned that 13-year-old self of mine,” says Chris Templeton. “I look back because he died.”

Templeton’s childhood, his innocence died at the hands of Wayland Brown decades ago. But, here he stands…a fighters….a survivor and a voice for others who have lived a nightmare similar to his.

“It’s a loneliness that I wish nobody to ever feel,” says Templeton. “I know there are others out there suffering still. I and many others want to be advocates to speak out and let them know that we are here to help.”

Chris Templeton was a typical boy growing up in Savannah in the 1980s. He had a love for sports, family and the church.

But his life would be changed forever when a Catholic priest, Father Wayland Brown, befriended him. Brown would earn Templeton’s trust, only to violate that trust and his faith in the most heinous way imaginable.

“That 13-year-old boy died the first time he was raped by Wayland Brown,” Templeton recounts. “I remember the times before that, being happy..playing ball and just being a kid, but he just died that first time he was attacked inside that pickup truck.”

The repeated sexual abuse at the hands of Wayland Brown remained buried deep in Templeton’s memory for years, until the images and horrific memories came flooding back.